Dorćol - where the roads meet Dorćol is one of the oldest and most significant settlements in Belgrade. There isn’t a part of Belgrade which is so rich in history and so rich in stories and legends like Dorćol. Many Serbian artists found their inspiration in Dorćol: Svetlana Velmar-Janković, Ivo Andrić, Meša Selimović (who spent the last years of his life in Dorćol), Stevan Mokranjac and many others.

The origin, meaning and history of Dorćol

The name Dorćol originates from the Turkish language and literally means “four roads” (dört – four, yol –road), that is, a “crossroads”. This crossroads was at the corner of today’s Cara Dušana street, Kralja Petra street and Dubrovačka street, and it used to be an important trade route between Turkey, Austria, Bulgaria and Venetian Republic. It is worth pointing out that Belgrade is not the only city which has Dorćol. There is also one Turkish city in the Mediterranean with the same name, given to it after an ancient crossroads between the East and West.

Since the ancient times, Dorćol was an important part of Belgrade so the biggest Roman colony in the region was located in the area around today’s Students’ park and Vasina street, at the very place where Dorćol begins. Even today certain streets, like Uzun-Mirkova street and Kralja Petra street, have kept the rectangular shape of this Roman settlement built in the first century AD.

Many centuries later Dorćol was alternately changing its rulers, from Turkish to Austrian ones, which influenced its structure and architecture. For example, the oldest house in Belgrade, built in the 30s of the 18th century, was in Cara Dušana street 10, and it dates from the Austrian period. On the other hand, Bajrakli Mosque is the legacy of the Turks to Dorćol. It is the only mosque which wasn’t destroyed after the entire Turkish population left Belgrade in 1867. Also, there is a series of other buildings, built in oriental style, such as today’s Museum of Vuk and Dositej in Gospodar Jevremova street 21, the place of former and first major school in Serbia.

We must point out that the famous Čukur-fountain was in Dorćol, where the conflict between the Serbs and Turks started, which eventually led to full independence of Serbia. Also, Gavrilo Princip attended the First Belgrade Grammar School, whose address was in Cara Dušana street 13. The seat of the first Serbian Government from 1806 was in Braće Jugovića street. Vidin-Gate, one of the four Turkish gates and entries to Belgrade was located near today’s First Grammar School. Bohemian quarter Skadarlija is an essential part of Dorćol. Dositej Obradović, Karađorđe, Nikola Pašić, Đura Jakšić, Meša Selimović, Stevan Mokranjac, Slobodan Jovanović and many others lived in Dorćol.

Apartments in Dorćol for daily renting

There are several apartments that we offer in this important Belgrade quarter, which are located in Budimska street, near Skadarlija, Botanical Garden Jevremovac, Bitef theatre and Strahinjića Bana street, famous for its clubs and night life. These apartments are all placed in the same building. They are the following: Buda, Mali Buda, Lilly and Green.

Apartment Buda is a comfortable two-room apartment on the second floor. A modern kitchen with a living room will fulfill all your expectations. Besides, there is a balcony overlooking Dorćol. 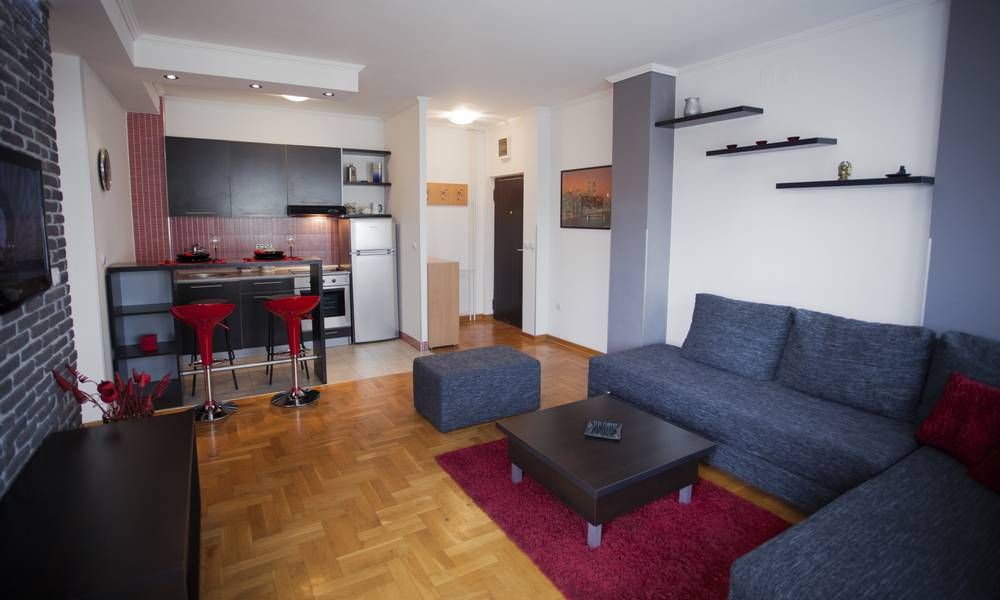 Apartment Mali Buda, placed just next to the above mentioned apartment, is a comfortable studio and neighbour of apartment Buda. It has a modern and aesthetically nice interior, and when combined with Buda, it is very affordable for guests who come together but want to be separate. 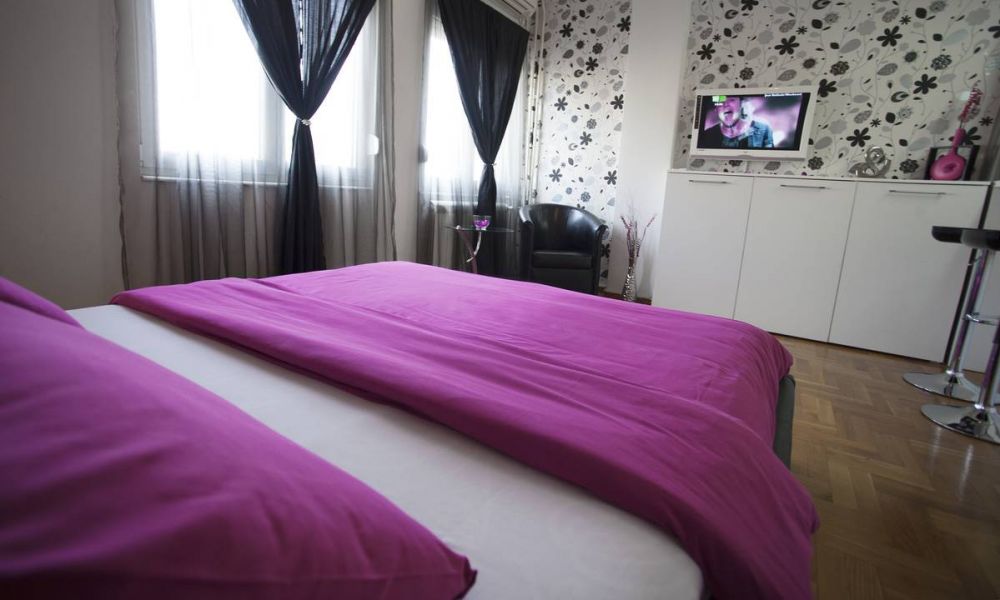 Apartment Lilly is also a studio on the fifth floor of the same building, which has a similar interior like Mali Buda. So, its characteristics are comfort and modern design. Like Mali Buda, it is suitable for two persons. 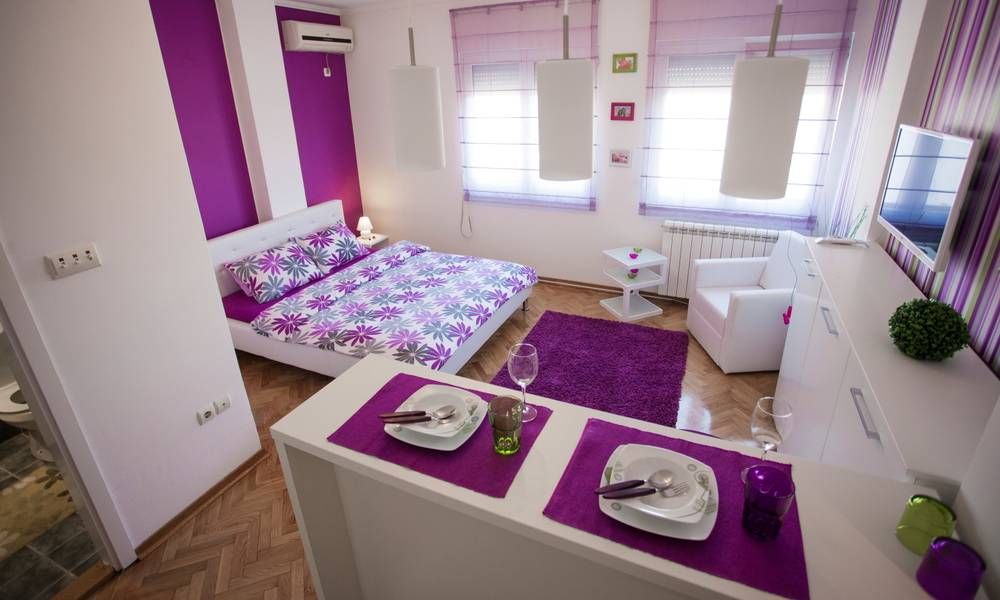 Apartment Green is a two-room apartment on the fourth floor. It is named after green colour which is dominant in its interior and one of its properties is a separate bedroom which has a double bed. Apartments Green and Lilly are also suitable for visitors who want to stay close, but keep their intimacy, as well.

It is important to point out that all four apartments have their own garage space, which is located in the building’s back yard, has a cover and is protected by a remote-control door. This is something which is rather lacking when it comes to apartments in general.

In Visokog Stevana street, very near Cara Dušana and Strahinjića Bana streets, and Danube quay too, there is the Apartment Dorćol, which holds the name of this city part. It is a comfortable studio, suitable for two persons, equipped with a double bed, a fold out arm chair and an LCD TV.

Apartment Galerija, in Georges Clemenceau street, is a studio with an interesting interior. Suitable for two persons, it has a video surveillance and 24/7 security. Next to it, there is another studio, which is the same, so they are suitable to accommodate more persons.

In Skender-beg street, there are totally identical apartments with the same name – Skender 1 and 2. Apart from being identical, these two-room apartments are very near Strahinjića Bana street and Danube quay. Also, the Museum of Science and Technology is in the same street.

Whatever apartment you choose, you should know you will be in a very interesting surrounding, full of history and culture since Dorćol is the place where all roads, leading from the east, west, north and south meet.