A guide to Vračar – Belgrade – Part I Vračar is the most densely populated municipality of Belgrade, yet this isn’t the most interesting thing about it. This central city municipality is rich in historical attractions and sights, which we will describe in a bit unusual way. Namely, we will link the streets in Vračar, where our apartments are located, with the very sights which are located in them or their immediate vicinity, and also with the historical events which took place there or the people who lived there.

The origin of the name of this municipality is not completely determined. The term Vračar was firstly mentioned at the end of the 15th century in Turkish plans for conquering Belgrade, but there are several versions regarding the origin of its name. It is associated with the verb “vračati” (engage in witchcraft) and an ancient legendary hero whose name was Vračar, who lived in the territory of this municipality. Another theory says this part of Belgrade got its name after sparrows that were present there in great numbers, and still are. Vračar used to be a periphery of Belgrade (there were only fields after Slavija). It was divided into eastern and western part, while today it is one of central Belgrade municipalities. As stated earlier, it is one of the most densely populated municipalities of Belgrade, which has around 56000 inhabitants, and is considered to be the most educated one in Serbia, too. It is rich in sights: there is the St Sava Temple, Karadjordje’s Square, Belgrade Drama Theatre, the National Library of Serbia, Slavija Square, Nikola Tesla Museum, Kalenić market, the area of Crveni krst and many other sights we will talk about later in the text.

At the beginning, we will present the following apartments: Kristal, Kristal Spa, Idea and Intimo, which are located in the same building in Čuburska street. Čuburska street is the heart of Čubura, a part of Vračar that has a special history. It got its name after ”čubura”, a Turkish word for wide and shallow well which used to be there. Old citizens of Belgrade would often go duck hunting there since the whole area was rarely inhabited a hundred and fifty years ago, covered with scrub and considered a distant periphery of Belgrade. In the area of Čubura, very near Čubura park, there is a popular artisan center “Gradic Pejton” (Peyton place), which has a rather characteristic appearance and purpose.

Two-room apartments Kristal and Kristal Spa belong to the category of luxury apartments and have extremely modern interiors. A typical feature of Kristal Spa is its jacuzzi bathtub and sauna, as well as two bathrooms. This apartment also has two balconies.
Kristal is a very comfortable apartment which has a high-quality fold-out sofa in the living room, as well as harmonious interior and a fully equipped kitchen. 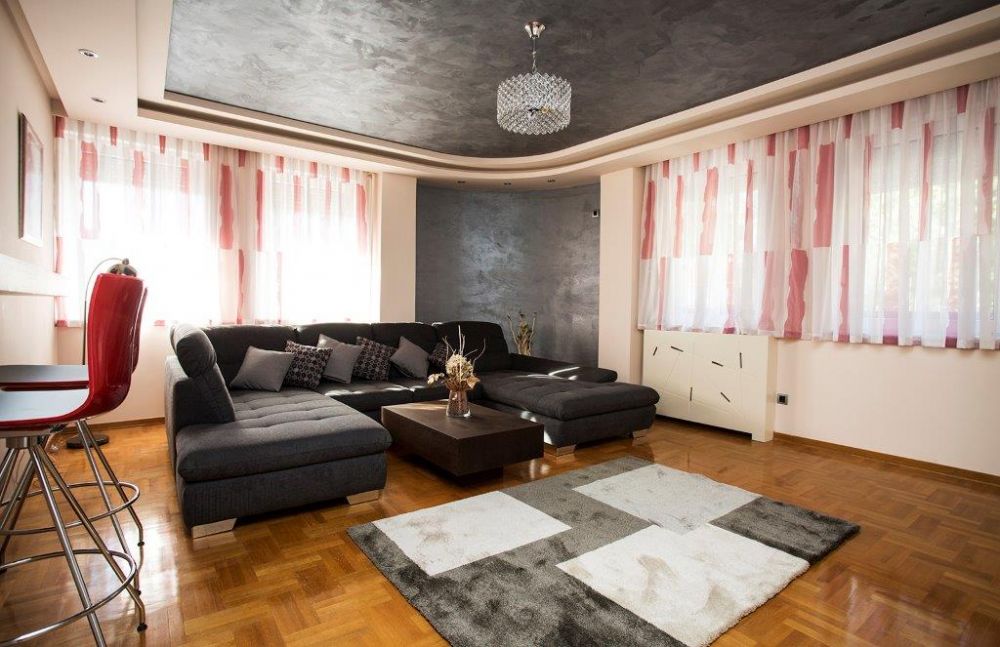 A feature of Apartment Idea is a bar that divides the modern kitchen from the living room. Like the above mentioned apartment, it is also a two-room one and can accommodate 4 persons. 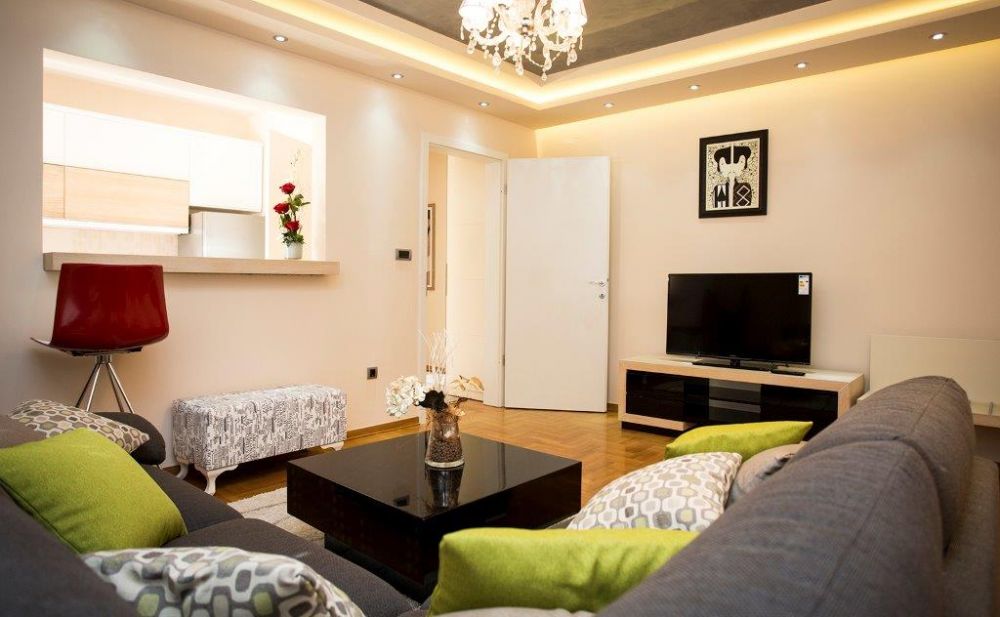 The fourth apartment located in Čuburska street is apartment Intimo. This is a luxury apartment whose main characteristic is a large hexagonal Jacuzzi bathtub. Although this is a studio, Intimo is fully equipped and its interior provides ultimate pleasure to visitors. 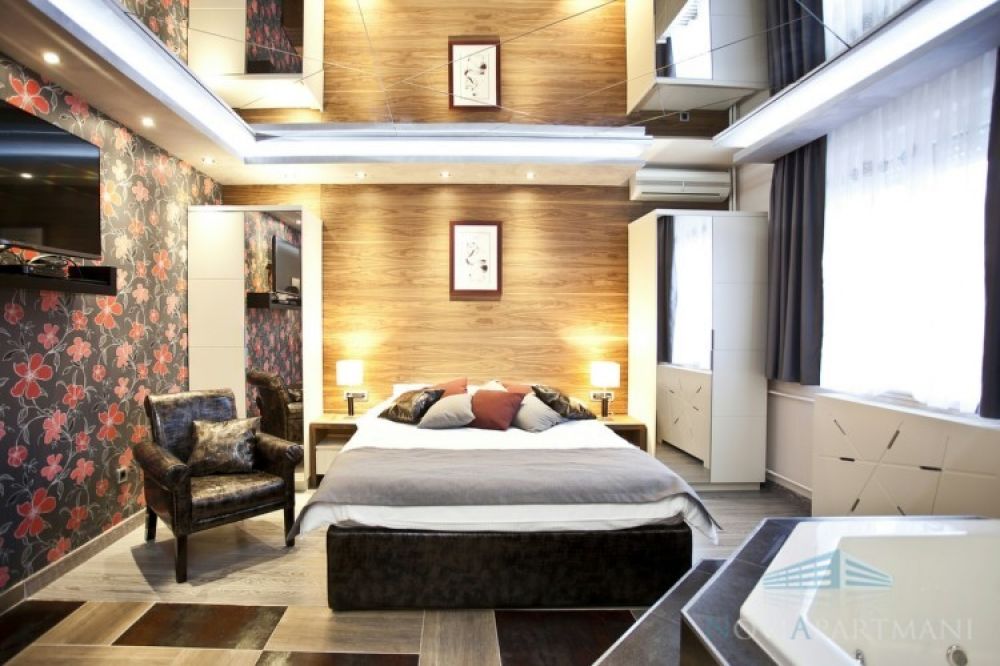 We have two apartments in Krunska street: London and Njujork (New York). Krunska street was named after an inevitable royal feature– crown (Serbian kruna means “crown”) and it is one of the most beautiful streets of Vračar. An alley of flowers which stretches along the entire length of Krunska street is a trademark of this street apart from a number of foreign embassies in it. Apart from this, this street is the seat of numerous famous buildings such as Nikola Tesla Museum, which is located in Krunska street 51, where the entire legacy of our great scientist is kept; then there is the Church of Christ the King (Krunska street 24), Catholic cathedral and Belgrade Archdiocese. An interesting fact is that famous Serbian poet Jovan Jovanović Zmaj lived at the beginning of this street for a while.

Apartment London, the first of our two apartments in Krunska street, is a three-room apartment which has two bedrooms and two bathrooms, and is suitable for five persons. It is equipped with style and the furniture is directly brought from London. Its characteristic is free parking in the building’s back yard. 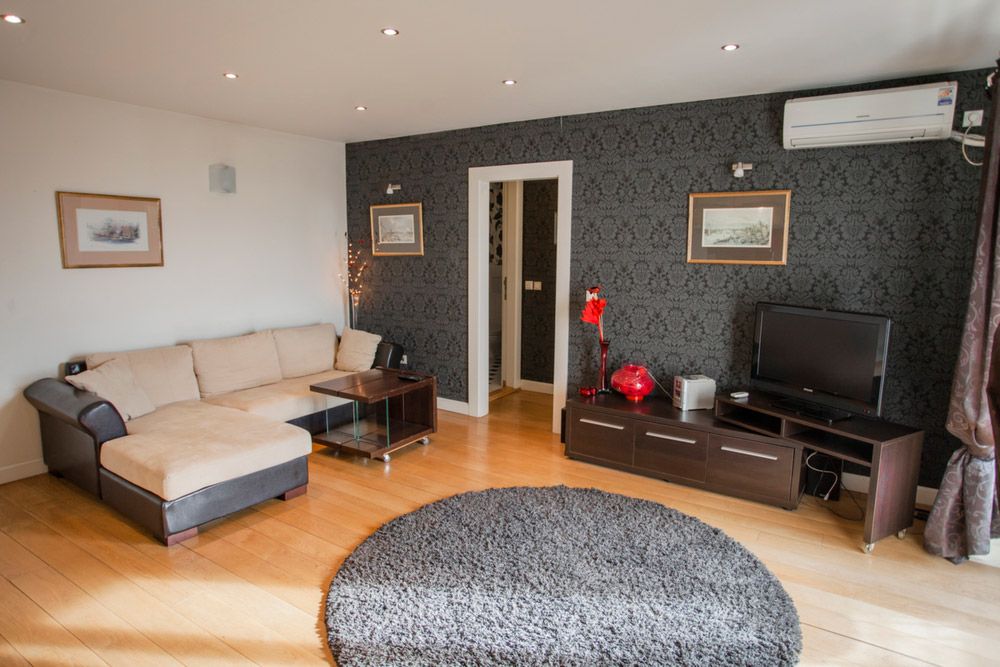 Apartment New York is a two-room apartment which has a modern interior and can accommodate up to 4 persons. The interior is very modern: it has a living room with comfortable corner sofa bed, which can be folded out, and a modern kitchen with all the amenities. 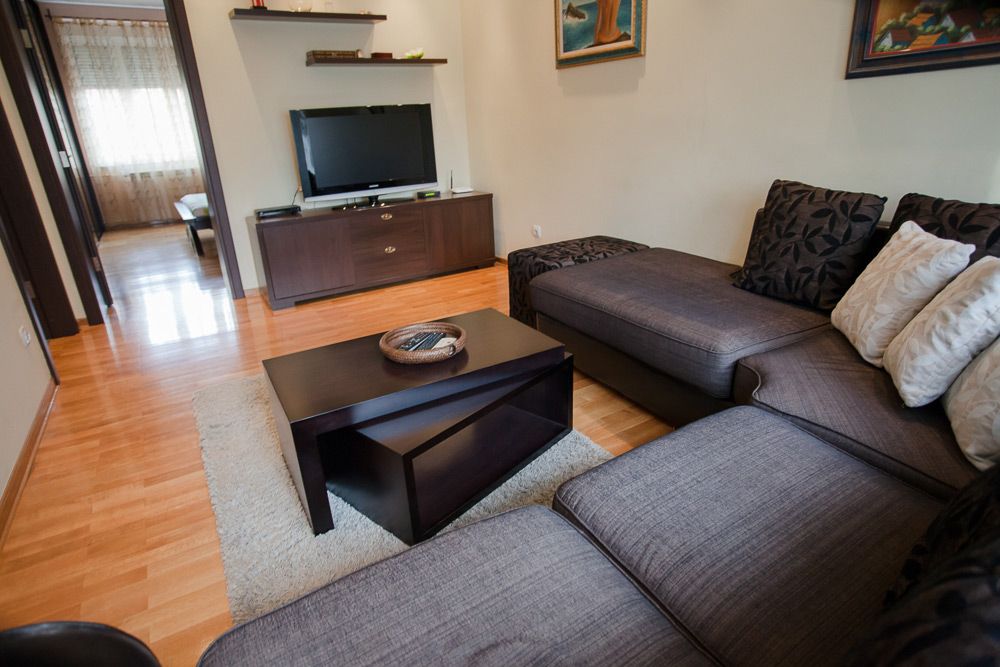 Read about other attractions and the history of Vračar and other apartments in this municipality in the part that follows.