Belgrade’s sea is ideal place to take a “pause from life”. What ever you need you can find in Ada, for all your needs, during day, evening and night. Oasis in the middle of Belgrade

Ada Ciganlija or just known as Ada is a river island on Sava River that is made into peninsula with artificial lake. In last decades it became recreational zone with beaches and sport facilities which accept over 100.000 visitors a day during summer season. It has around 7 kilometers of beaches that are druing summer filled with beautiful serbian girls and handsom serbian boys who often work out there. For those who are naturalist, or for those who are not yet but would like to try, there is also nudistic beach on south - west end of Sava lake.

Ada has a unique ecosystem, it is a oasis in the center of metropolis, most of peninsula is forested. There are many birds who live on Ada but also during migration season many migratory birds visit Ada island, if they realised potential that Ada offers, so can you. One part of peninsula is Ada Safari, small lake primarily used for fishing, there you can see how Ada island looked like as a marshy area before it changed into peninsula. For fishing lovers there is 300 numbered fishing seats with obligatory permit for fishing in Ada Safari. There is also a small zoo close to the lake with mostly swamp birts like swans and ducks and peacocks.

There are so many sport fields for team sport but also for individual play. On Ada there are courts for common sports such as football, basketball, waterpolo, tennis, regular volleyball and beach volleyball. 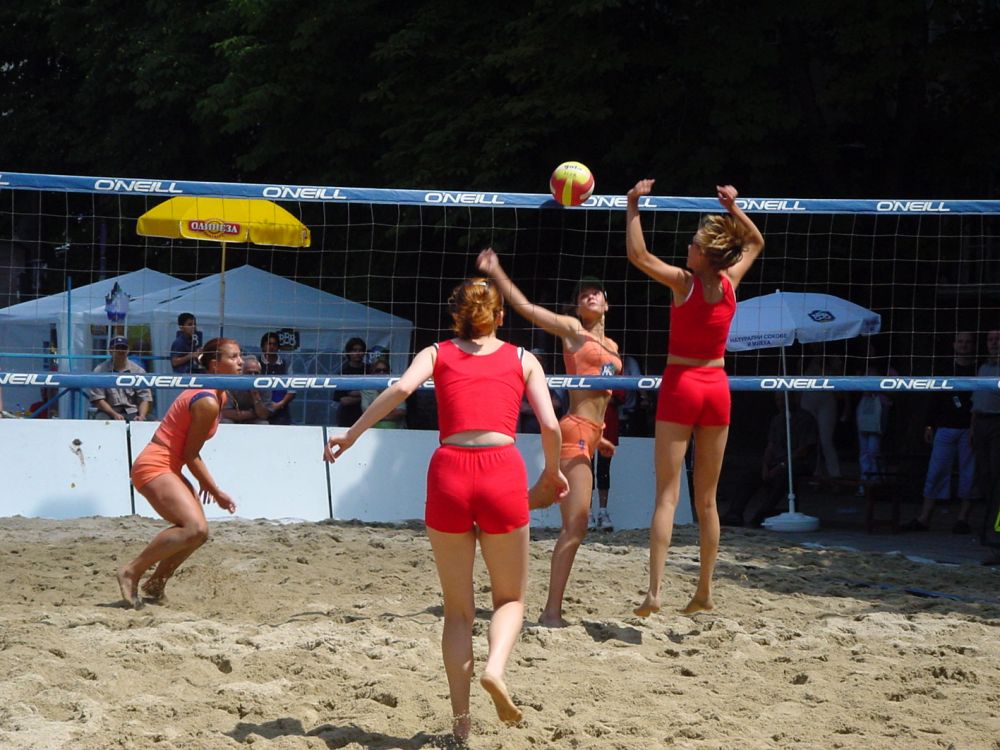 There are also courts for sports that are not so usual for most serbians like baseball, rugby, American football, golf and for senior citizens there are chess and bocce facilities. Bike paths are around 15 kilometers long and go around lake and around peninsula. There are also water slides, trim trails and paddle boats with which people can get to 140 meters high artificial geyser.

For adrenaline seekers Ada can offer a lot! Skateboarding ramps and rollerskating paths are there for those who do not have problem with maintaining balance. With kayaking, canoeing and rowing facilities you can really feel watter and go around peninsula and lake. Who does not have fear of hights, there is bungee jumping, artificial rock climbing wall, zip line accross lake and adventure park high in trees. If you miss snow and winter, you can maintain your skills on artificial alpine skiing slope and on artificial snowboarding slope. Other things you can also do on Ada are paintball, diving and cableskiing. For most of those things you need only some money and goodwill, if you have some doubts about trying some of this, W. Clement Stone once said „Thinking will not overcome fear but action will“.

Since city of Belgrade is known as a city with vibrant nightlife with many clubs that are open until dawn, it makes sence that good portion of them are situated in Ada Ciganlija. The island has over 70 restaurants, bars and cafes, as well as cafe-cinema and clubs. Most recognizable nightlife features are on the Sava river banks in north - east of peninsula, there are many club barges or splavovi as people call them here. Few years ago Makish side of the lake was more popular considering clubs and cafes who organised famous parties but in recent years other island side is reaching the same level with more options for parting. Apa Beer Garden is open for all beer lovers and others from 10th of July until 7th of August. It is a warming up for Belgrade Beer Fest and it different kinds of beer and lavish music programe with over 120 performances, entrance is free. Even though it sounds like a cool idea to swim in lake after night out and get fresh in hot summer nights, keep in mind that it is forbinden to swim after 19h and that in general it is not wise decision to swim after „few“ drinks as much as it looks like temptation.

How to reach Ada

There are many options to reach Ada Ciganlija since it is whell connected with the rest of the city. If you are comming with car, you can get there easily since there are a lot of signs around city poiting at Ada, from New Belgrade via Ada bridge, from center via Kneza Miloša and Vojvoda Mišić bulevarad, there is also big parking on the begining of Ada which costs 100 dinars an hour (80 cents) and also street parking along the island which is free but usualy occupied with numerious visitors. If your form of transport is bicycle, Ada is connected with bike paths along Sava river from Dorćol, via Brankov and Ada bridge from Zemun and New Belgrade. For public transportation best options from city center are busses that go from Zeleni Venac bus terminal, close to our more than 25 apartments, 85 and 89 busses from New Belgrade, and some busses that go from Main railway station. If you are comming from New Belgrade, there are also river boats that go from Block 70 to peninsula for 100 dinars (80 cents) and they are fastest way without jam. There is also a small Ada train that goes around lake and can be a nice way to visit most of things without walking a lot but it can also be interesting for kids to ride. If you are meeting with some locals, do not wonder if they tell you to meet in front of „Stonehenge“, Ada has an art piece that looks a bit like famous Stonehenge from United Kingdom, but it can be good landmark since it is on begining of Ada. If you are in one of our 15 Belvile apartments you can easily reach Ada Ciganlija in less then 10 minutes drive.